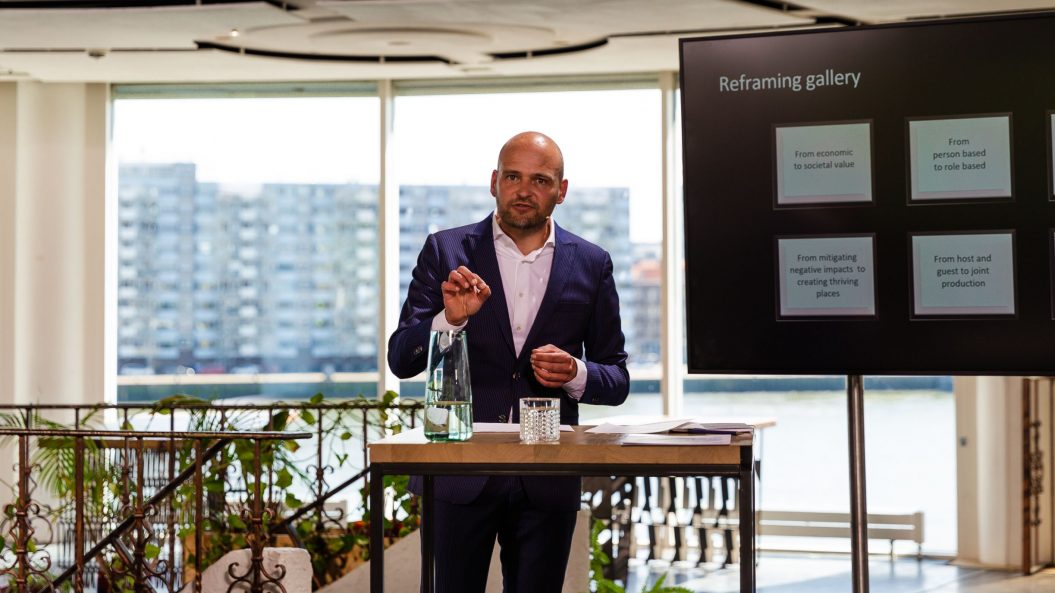 Broadcasted on 2 June 2021 / You can watch the inaugural lecture via this link.

The coronavirus has turned tourism in cities upside down. The empty streets and squares invited us to think about how we deal with large numbers of visitors. Will we go back to our old ways in the future, or do we want change? Ko Koens, professor of New Urban Tourism, argues for the latter. In his inaugural lecture on 2 June, he outlined the possibilities of a radically different perspective. Look at tourism as an integral part of multiple processes that can make cities better. ‘We’re doing this in Rotterdam with the motto that actions speak louder than words. Together with students, we are exploring the possibilities in practice.’

Ko delivered his speech at a symbolic moment and in a symbolic place. Behind him, the windows of BlueCity – a hub for pioneers in the circular economy – offered a view of the sunny Rotterdam city centre awakening from its lockdown. With guests attending both from the Netherlands and from abroad, all eyes were on the brand-new professor – either online or at least 1.5 metres away. We are dealing with the coronavirus, but we are also looking ahead. How can tourism start developing again? Led by moderator Samira Ben Messaoud, Ko shared with us his vision for the future.

Radical change
‘There is a real need for change in tourism in cities,’ Ko says. ‘I have seen many proposed visions, but very few strategies and plans. It would therefore come as no surprise to me if we were to fall back into the old routine.’ Ko calls for a radical, systemic change in which tourism can have a positive impact on cities. ‘This change requires a holistic view in which we see tourism as an integral part of the city, allowing us to open a new door to a new perspective to make cities better.’

Such a radical change in urban tourism is not easy to get off the ground, Ko warns. ‘Tourism is often seen as a separate sector that is unrelated to the urban environment, but stakeholders should actually be working together to develop something good for the city. Many stakeholders also want to preserve what’s left, and companies are now mainly trying to survive this crisis.’ Still, this change is worth the struggle. ‘At the moment, tourism is viewed too much in terms of economic value. In other words: what’s in it for the city? But not everyone in the city benefits. Cities are also in danger of becoming a commodity that people have to pay for.’

If tourism is viewed as an integral part of the city that generates more than just economic value, this can lead to beautiful initiatives, such as a public space called Superkilen in Copenhagen where refugees, residents and tourists meet. ‘Tourists and residents are essentially the same. Even as a resident, you are sometimes a tourist in your own city. Look at how you can bring those flows of visitors and residents together, and see what the impact is. Use a hyper-local approach for this, because that makes the challenge – which is complex enough due to politics and conflicting interests – more manageable.’

Ko does not have a ready-made roadmap to a new kind of urban tourism. ‘There are no quick fixes. What I do know is that you have to tackle the challenges in practice together with all stakeholders. Actions speak louder than words, as we say in Rotterdam. We are already working on this through the Urban Leisure & Tourism Labs at Inholland University of Applied Sciences in Amsterdam and Rotterdam, in collaboration with local stakeholders as well as students. That way, we are all learning from each other and making the city better together. Hopefully, we will also reinvent a new form of urban tourism in the process.’

The entire article about Ko Koens’ lecture appeared on the Inholland website and can be read there.